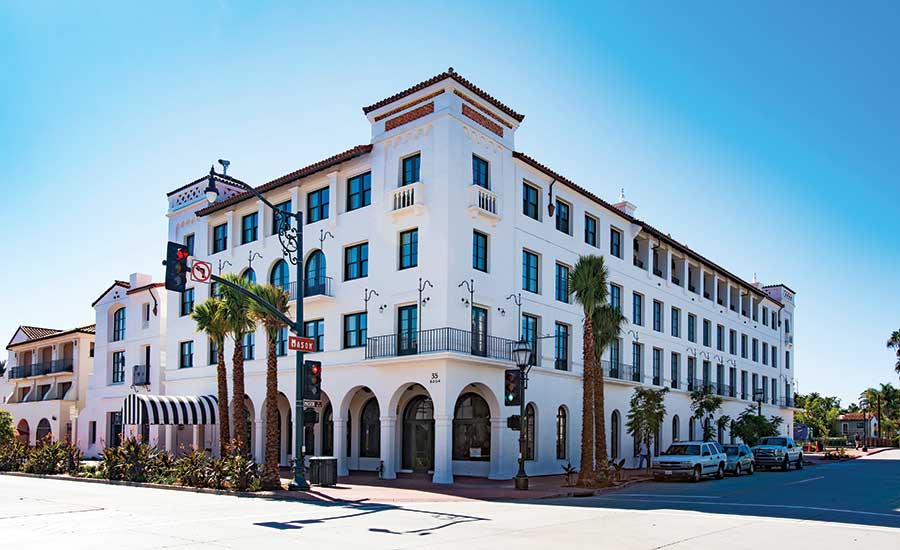 Opened in 1925, Hotel Californian was one of Santa Barbara’s first Spanish Colonial Revival structures. The restoration and renovation of the 62-room hotel adds Moroccan flourishes to the original architecture, featuring more than 1 million pieces of hand-painted tile in elaborate patterns.

“This renovation substantially adds to the vintage fabric of Santa Barbara’s main street by transforming a piece of history that had become a blighted eyesore,” a judge said.

When the project architect discovered that the hotel’s repeatedly remodeled first floor no longer reflected its original design, the team restored its appearance, as shown in the original construction plans and historic photographs. One minor modification was raising the level of the sills to meet modern flood requirements.

The original structure posed challenges, as it was constructed of unreinforced masonry on shallow foundations in fill soil with a high water table. The team applied epoxy and carbon-fiber wrappings to the original facade and through-bolted it to a new structural steel frame. They anchored it into a new foundation system comprising a series of reinforced auger pressure grouted displacement piles up to 90 ft deep. These piles use a customized drill tool to inject grout and create soil walls, and the grout is reinforced by steel.

The Californian’s original State Street facade (including about 15 ft of connecting exterior side walls) needed to stay upright while new foundations were dug and a hotel built onto it. A new storm drain and recent street improvements precluded conventional shoring, so the team used an enormous scaffolding system—99 ft across, 43 ft deep and 51 ft tall—installed at grade to buttress the historic facade’s south-facing wall. To restore the facade’s original appearance, project crews saved, repaired or recreated windows, doors, beams, wrought-iron balconies and railings, plasterwork, roof tiles and corbels, updating all as needed to comply with current building codes.