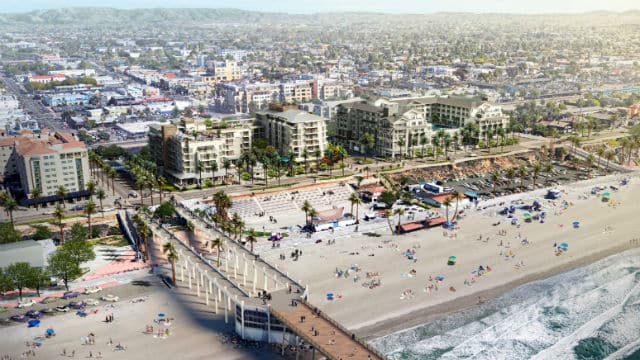 POSTED BY CHRIS JENNEWEIN ON JANUARY 28, 2019 IN BUSINESS: Times of San Diego

Hyatt Hotels announced plans on Monday to open two hotels in the Oceanside area as part of a major West Coast expansion.

The Chicago-based lodging chain plans to open a total of 40 hotels across California, Oregon and Washington, with 34 of those in California.

The larger of the two hotels in Oceanside will have 226 guestrooms and operate under the Destination Hotels luxury brand.

The other hotel, part of the eclectic Joie de Vivre group, will have 161 guestrooms.

Both are scheduled to open in the fourth quarter of 2020 on two-block site along Mission Avenue and North Pacific Street in Oceanside.

The brands were developed by Two Roads Hospitality, a lifestyle hotel management company that Hyatt acquired in 2018.

“The West Coast U.S. is a primary area of focus for Hyatt, and we see enormous potential to grow our portfolio of brands in this region,” said Jim Chu, global head of development and owner relations. “Today’s announcement further demonstrates the overall strength and resonance of Hyatt-branded hotels with developers, owners and guests.”

TynanGroup is working on conjunction with Cambell Anderson as the Project Managers.