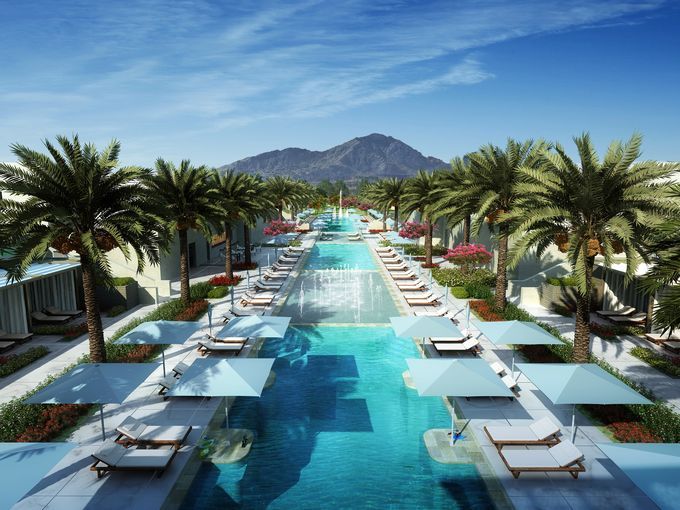 By Dawn Gilbertson, The Republic | azcentral.com

Ritz-Carlton has been teasing travelers about a new Paradise Valley resort for two years, making it sound like the place is already open.

But construction hadn’t even started and the opening date for the swank 205-room resort on prime Lincoln Drive land kept getting pushed back because of permitting issues with Paradise Valley. A late 2018 opening became a March 20, 2019, opening.

On Tuesday, the opening date was changed again, to fall 2019. But this time, the 122-acre resort and residential community in the works for 15 years is finally a go, developers, Ritz executives and Paradise Valley officials pledged at a ground-breaking ceremony.

“We’re excited about finally being able to start construction,” Jerry Ayoub, president of Five Star Development, the Scottsdale-based company that is developing the resort, said in an interview. “It has taken a long time.”

The resort, the centerpiece of a Ritz master-planned community in the shadow of Camelback and Mummy mountains, will be the first Ritz-Carlton resort in metro Phoenix and only the second in the state. The other, the tucked-away Ritz-Carlton Dove Mountain north of Tucson, is one of only two Forbes Five-Star resorts in the state. The other is Canyon Suites at The Phoenician.

The Ritz Paradise Valley will be the first Ritz resort built from scratch in the United States since Dove Mountain opened in late 2009. Room rates at Dove Mountain start at about $600 a night in peak season.

Like other upscale destination resorts, the new Ritz will feature all the amenities luxury travelers demand: a top-notch spa and fitness center, rooms with the latest high-tech touches, lush landscaping and a glamorous pool.

Developers boast that the 400-foot-long pool, dividend into four areas catering to couples, families and cabana gatherings, will be the longest pool in North America.

“We’re going to focus on what people come here for today, especially the new generation of customers,” Herve Humler, Ritz-Carlton’s president, said in an interview. “They’re coming to experience, so we have to ensure from the experiential standpoint they find a great home with all the amenities.”

Competition will be tough. Some of Arizona’s nicest resorts, including Sanctuary on Camelback Mountain and the Camelback Inn, call Paradise Valley home even if they claim Scottsdale as their location in marketing materials, much to the chagrin of Paradise Valley Mayor Michael Collins.

Collins, who said he’s been a supporter of the resort since he was on the Paradise Valley planning commission more than a decade ago, thanked Ritz and Five Star for putting Paradise Valley in the resort’s name and for sticking with the project all these years.

He called the new Ritz “the next crown jewel for us in the neighborhood.”

Ritz is no stranger to greater Phoenix, having operated a high-end business hotel for years at another premier address: 24th Street and Camelback Road. It closed in 2015 and is now The Camby. Plus, Ritz is part of mammoth Marriott Corp., and the Marriott family returns to Camelback Inn every year for special occasions.

Humler acknowledges the competition but says the Ritz will stand out for its service. The resort’s 350 employees will be known as “ladies and gentlemen serving ladies and gentlemen,” the chain’s hallmark, and will be trained intensively.

“It’s not working for a paycheck. It’s delivering excellence and having fun doing it,” Humler said.

Five Star first proposed a Ritz-Carlton resort in Paradise Valley in the mid-2000s, earning support from the Town Council in 2008, according to Arizona Republic reports at the time.

A group of residents called Preserve Our Paradise quickly rallied against the plan and collected enough signatures to force a referendum. While the group supported the idea of a Ritz-Carlton resort, it opposed the density of the project’s residential units. It’s planned to have 81 villas and 40 homes. Many Paradise Valley  residential lots are an acre or more, and critics argued that the smaller lot sizes around the resort would be a bad fit for the town.

The referendum vote swung heavily in Five Star’s favor, with residents approving the measure by a 2-1 ratio in November 2008. Before construction could begin, however, the Great Recession hit and Ayoub tabled the plans indefinitely.

Talk of a revived resort project surfaced in early 2015.

Ritz-Carton’s Humler said he’s never met a hotel developer who has worked on a site for 15 years.

TynanGroup is the Project Manager for the Ritz Carlton Paradise Valley.

Behind the scenes of Sheraton Phoenix Downtown renovations: Here’s what’s new at the hotel